Best Board Games For Kindergarteners 2018

Last updated on January 7, 2018 Following up with the theme of board games are the best gift you can give that doesn’t need batteries theme. Today I went...

Following up with the theme of board games are the best gift you can give that doesn’t need batteries theme. Today I went shopping for some Santa style gifts if you know what I mean. So in my pursuit of being a budget Kriss Kringle, I found some interesting board games that reminded me of my childhood and that would make excellent gifts for kids. If you’re shopping for kids that are older or younger than kindergarten age, be sure to check out my guide to figure out the best board game for your child based on age.

Best Board Games For Kindergarteners 2018 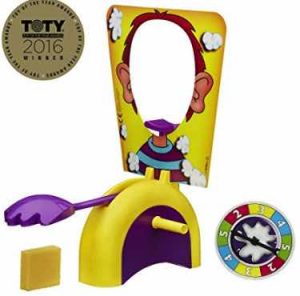 But let’s brighten things up a bit. You saw the viral clip with the dad getting whipped cream face in front of his kid. This is that game in case you didn’t figure it out from the title.

Pie-face is Russian roulette with whipped cream. You load the arm with whip cream, players then alternatively place their face into the cut-out target area. Then You spin a “mini-wheel-of-misfortune” to see how many turns of the handle you need to make. Each turn can result in nothing but some mechanical crackling or a hilarious pie in the face. How is this not in every household already. Or even kindergartens?

This is the best board game for kindergarteners that need to be “disciplined.” It would be the perfect conflict resolution tool for kids. “Timmy, if you don’t stop picking on Justin you’ll get four turns on the Pie-Face game. Let’s face it, detention is a badge of honor, Pie-face, and the tension that comes before it, now that’s punishment.

The best thing about this game is the tension. Ultimately it’s just a sweet treat that you don’t manage to get into your mouth. But the tension in the cranking mechanism is amazing and terrifying. And when it all goes “splat” the whole room erupts in cheers and laughter. That’s how strong the tension is each and every round.

The premise is simple; you have a board in which you drop tiles/checkers, and you need to get 4 in a row. It’s an ancient game, and I hated it when I was a kid. I hated these X’s and O’s type of games; I always get trapped in a lose-lose situation. I always had a problem with anticipating moves and thinking two steps ahead, weird that I like chess and that was never a problem for me in that game.

But childhood trauma aside, this game is so easy; I wouldn’t put any age restriction on it. As long as your kid won’t swallow the tiles he can understand and play this game, I think the limit is under three years old. But don’t quote me on that I dropped a penny down my nose when I was 9, so I shouldn’t be advising people on child safety.

I did notice that young girls like this game more than the other’s on this list, so this may qualify as one of the best board games for kindergarteners regardless of their gender. Players have a panel of suspects in front of them, and they draw a card with the face of their mystery man or woman. And then players need to ask each other questions about the man or woman their opponent is hiding and based on those answers they eliminate suspects. You usually use descriptive features like hair color, red cheeks or facial hair. But you can get creative with the questions, and that freedom is a huge plus for the game.

To be honest, I first played this game as an adult with my aunts family and their neighbors after a barbecue and a few drinks and It was fun, although the questions we asked were quite racist and revolved around dark societal stereotypes. Racism aside, that was more of us, than the game itself. This simple game is fun and although not a top contender for the best board game for kindergarteners; it’s a guilty pleasure that you should try once the kids are down, and you and your friends are up a couple of drinks. This game is amazing, and you will find yourself obsessing over it. Bounce-off is a crossover between 4 in a row and beer-pong. You have a horizontal grid between the players, and your objective is to bounce some balls into that grid into a certain pattern you get from a card. The concept is very easy, and that makes this game an amazing equal playing field for both adults and children. This is the best board game for kindergarteners that are high energy because it’s fast pace works with their energy levels not against them.

The balls are fairly large, but the manufacturer still has a choking hazard warning on the box. So keep that in mind. The unique feature is that it’s a more physical than most board games. And that instantly creates a physical engagement that will draw in kids that just need that outlet for their physicality. It also teaches them how to bounce a ball accurately of a table, which might come in handy in a decade or so. Quirkle is a bit more abstract, but it’s also more cognitively engaging and has a scoring system that you need to keep track off. It’s a mix of dominos, and the scoring system is a bit more like scrabble. Players play tiles like in dominoes that can be a range of 6 shapes and six colors. You score for each line of shame shapes or same color tiles you put down. And if you complete a six tile set either by color or shape, called a Quirkle, you get double the points.

The tiles are somewhat small, so watch out for smaller kids, but the game is fun, engaging and a good substitute for the classic domino game. This strikes a good balance between being engaging enough for adults and fun for kids. I think I would be a great gift for the puzzler type of kid. It’s definitely in the running for the best board games for kindergarteners, but it you do need to keep score so it might not be for every kid out there.

Important side-note for adults. I dare you to play this game with only adults and not use the name of the game as a euphemism for something naughty. And as a added benefit, when you play with your kids the next day, you will end the game in tears of laughter. 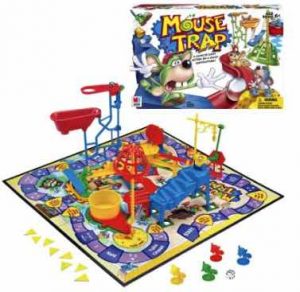 This game is probably the game on the list that will get the biggest reaction. It’s trouble but with a very elaborate player capture mechanic. Players move spaces around the board according to their dice rolls. That’s the boring part. The interesting part is that the game comes with a very elaborate, colorful and exciting Rube Goldberg machine, one of those very elaborate domino effect machines.

Those are just cool, and I used to play with my mouse trap just to see that machine work. There’s something fascinating about very elaborate predictable displays of physics. There is some assembly required, and there’s a lot of small pieces. So watch out for the smaller kids. Which is a shame because I remember my little sister looking fascinated at the movements and the sounds of it when she was just two years old. She loves watching the ball bearing tumble down the stairs, left-right, left right and then trigger the cage that would fall to catch the little critter. For pure spectacle, there’s nothing like a mouse trap.

I also like the game because it opens up the conversation about physics and science with kids. Yes, I am that uncle that thinks Thanksgiving is just as good of a time to teach your kid about gravity, friction, and kinetic energy. Trouble was my favorite game growing up, and unlike other game, I did play in pre-school. So this would be empirically my top pick for the best board game for kindergarteners. The mechanics are simple…players have four pegs that they need to move around the board to their base. You move what the central dice located centrally on the board shows you to move. The board comes with traps and shortcuts. The premise is simple and is a more mechanical simplified and symmetrical “Snakes and Ladders” variant.

But the simple board and the center push to roll just fascinated me when I was younger. Can’t put my finger on it but it’s like playing roulette. You beg lady luck to give you that exact number you needed to jump ahead of your opponents. And mind you I was a hyperactive kid that god bored of most of my toys. The fact that this managed to engage me with mechanics, shows that this wasn’t just flash, an update on a new recipe. This was good clean design with just enough flash to excite but not become a one-trick pony.

But all adults should be warned that receiving a gift that is not electronic or has a screen may scare some of today’s kids. So always have a smartphone and some chocolate on hand in case they go into analog shock.

Important note for those without kids or that don’t have any kids currently on their shopping list. Consider replacing your seasonal good deed with a gift for an orphanage. I don’t want to undermine the effort we do for the homeless, but I think a toy can go a long way to brighten up a kid that was tossed into the deep end of life way too early. (obviously, check in with your local orphanage to see what they allow or what they need beforehand)