Last updated on January 7, 2018 Yes, you read that right, this post is about chess sets. But why you may ask. Well, I always found myself attracted to...

Yes, you read that right, this post is about chess sets. But why you may ask. Well, I always found myself attracted to that quasi-intellectual decorative style: you know, the bookshelf, fireplace, small table, liquor cabinet and armchair, in an atmosphere of old tobacco and elitism. Now, I can’t afford to accompany my bookshelf with the elephant size grand piano, so I decided to settle for another chic piece of old-school posh: a chess set. This was on of the few sports I could compete with the adults as a child, so maybe I am subjective but it definitely an air of elegance and it’s cooler than glassware of some other Chinese trinkets. And seeing as it’s the holidays I said, why not make a post about them because they make a classy gift but the price ranges you can find them at is really wide, so I thought some reviews and comparisons would serve the people that want to buy such a gift really well.

Foreword: this isn’t a review of what chess set plays chess the best. You can play chess with a chalk outline and 32 different rocks. The quality of a chess game is given by the players, not the hardware.

The Lord of The Rings Collector’s Chess Set This looks amazing. It’s a perfect mid point for 2 geeky passions of mine. The 32 playing pieces are sculpted out of a soft alloy and have the likeness of the cast members of the movies. If you are a collector this will probably the classiest LOTRs themed item in your collection.

The playing surface is a glossy porcelain with a metal frame. Under the glossy surface, you can just make out a stylistic map of Middle-earth. It’s quite impressive how luxurious the makers made this set considering it’s a fantasy theme set at the end of the day. The golden accents are especially distinguished. Although it somewhat clashes with the level of detail you can find on the rest of the chess piece.

Size wise the pieces are somewhat average at around 2 inches and the board is large enough to be noticeable and to not cramp up your playing. The pieces feel heavy and have a solid base and are intricately crafted. The neutral color scheme would make this a great set for the skilled miniaturist to paint and look after. Another important note is the base of the board, it’s really solid and heavy. The whole set comes up to a hefty 23 pounds, which I very much like as it gives you that solid feel when integrating it into an old school wooden bookshelf. 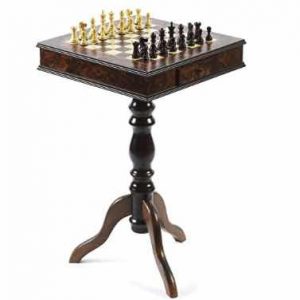 This is the real deal. The best high quality chess set, you can get. This is more furniture than the tabletop game. This is sculpted out of real mahogany and elm while the chess pieces are made out of Rosewood. The pieces are nice and detailed but lighter than I would like. But you can exchange the pieces for something better later. The piece of “resistance” is the table itself. The detail in the grain of the wood is gorgeous and the lacquer is top shelf finishing. On top of that, you have the very elegant one-leg Italian design.

Which can be a give and take. On the one hand, it looks very elegant on the other, it raises some alerts in my head about the stability of what is. Things get knocked over, and if you have dogs or children that are almost an inevitability. So if you live the bachelor lifestyle, this is a classy touch to your smoking room. However, if you are the family type and you need something for your man cave this is a risky proposition.

The best thing about this piece is the luxurious finishing and although I am confident that it would stand the test of time, I very much doubt that this is made to be accident proof. Also, as someone that has an antique bookshelf with great finishing, I can tell you that cleaning it and maintenance is not something you should take lightly. Wood finishing is like a fit, athlete body, if you want to have it long into your 40s and 50s, you need to take very good care of it.

It needs to be said that this is the most intricate chess set of them all especially when we’re talking about the board. The true 3D design board is composed of a holder for the board and a checkered glass playing surface above it. This design makes the support have a uniform design, that is quite unique in the market, at least at this level of detail. You get great detail when it comes to the chess pieces for almost all top-tier chess sets, but this board is on another level. This combined with the removable glass surface makes this ideal for people that are accident prone or accident avoidant.

Speaking of the glass playing surface, the biggest feature I noticed is the squares are somewhat larger than some other 13’’ x 13” playing tables. This combined with the wide chess pieces that are higher than usual (3 inches) gives a great sense of scale to the playing experience despite the small footprint of the whole set.

The pieces themselves have great levels of detail for the price. They are made of a light alloy that gives them weight. The finishing is made of weathered bronze and silver. Which adds to the theme of the set and the atmospheric gravity of the playing experience. The bottom is soft felt which gives just the right combination of glide and adherence to the glass surface. Another premium table from Italy is the Verona game center. This stole my attention because of its versatile nature. I like the elegance of chess but more often than not I end up playing poker or backgammon with my friends. So I really can see myself using this table for more than the occasional battle of wits.

The playing surface is an 18” square and the table is 23” x 23” x 27”. And the chess square is a good 2 inches. The materials used are premium all round. Mahogany, walnut, briarwood and maple for the table and the boards are made of inlaid briarwood and maple. And while we’re on the boards it’s worth nothing that the craftsmanship is on another level, the bright trim and the colors are high contrast and very sharp, but warm and elegant at the same time, especially on the backgammon table which is very impressive.

But to be fair I’ve never played backgammon on such a refined piece of craftsmanship so it might be just my impression. But it feels exquisite. An important note, however, the set does not come with checkers, which is a shame for such a high quality chess set.

But that’s really nitpicky, because when it comes to decorative game tables, it really doesn’t get any better than the Verona and this might be the best chess set overall, but all that comes at a price.

This is a good chess set and I only added it to prove a point. The experience does not depend on the cash you spend.

When I was a kid, among all the gifts I ever received the most memorable were a book on the physical and chemical particularities of water and a basic, wooden cheap chess set. I did not think much of either of them at first, but as luck would have it, the summer I spend with my grandparents, I was quite limited in terms of entertainment options, and in that context chess training and an analysis of the microscopic universe of the water molecule proved quite fascinating and opened me up  to a lot of other less conventional entertainment options.

A good chess set like this is one of those little things that light up a life and end up making a huge difference in the long term. As for the chess set itself, it’s a basic 15.7” x 15.7”. The wood stain is quite pleasant and looks like it won’t wear out by the time he gets bored of it. It feels and looks like one of those old chess kits you find in your grandparent’s attic. It’s made of pine but feels really solid and rugged, despite being light weight cheap chess set. This is the best chess set when taking into account a balance between the premium sets and the more value offers. It features a nice handcrafted board and the pieces are quite large coming in at around 4 inches. The board itself is reasonably sized at 21.65” x 21.65”.

Design-wise, it’s a take it or leaves it kind of thing, it’s an eastern European etno theme because the craftsmanship is made in Poland. It takes some getting used to but ultimately it grows on you and you end up with quite a unique chess set. Extra points on the dark staining and very light almost whitish finish on the light boxes.

The board is made of beech and birch wood and the chessmen are made of hornbeam and sycamore. They are on the light side and I really appreciate a little weight in the hand while playing. But they definitely feel better in hand than the budget options. And the staining on the white pieces is very aesthetic pleasing. This is something I would have gotten for myself before I left for college, it’s the right balance between size, price, and uniqueness.

The size of the set is a huge plus in my book, but it may be a hindrance for those looking for something more portable. And another cool feature is the recessed holes on the inside of the box for each piece. It’s really a classy touch. That will make carrying around the set a lot less noisy and will preserve the set much better.

The Consul is another European crafted chess set. But at a normal human-size this time, with an 18.5” x 18.5” board and pieces coming in at half an inch less than the Ambassador.

Now, the important issue is that what I call small, is in comparison to some 21-inch alternatives I’ve played with and which I prefer when compared to the more civilian sized chess boards.

The design is more Celtic, old germanic in theme, despite being also crafted in Poland. Design wise I like it more than the Ambassador, it also has the recessed style chess piece storage that will keep the pieces in place and prevents the finish from damaging for years to come.

The color theme is less bold, the wood stain isn’t as dark while the white finish is just as bright. Another difference is the weighted chess pieces which feel better in hand. The combination of birch and hornbeam for the board and chess pieces can be found also on this set as well as most sets in this price range.

Best Racing Chair for The Money 2018