Last updated on December 3, 2019 In response to my recent board game phase, my cousin said that I was wasting my time. Monopoly got it right decades ago,...

In response to my recent board game phase, my cousin said that I was wasting my time. Monopoly got it right decades ago, and no other simple board game could be as competitive and engaging with such a simple design. While debating, we reminisced about the day-long sessions that we use to have. He would always dominate on the first day, but I would slowly crawl back and clash as an equal by the third day. We would have a neck and neck finale that usually was won by the one of us that did not make any risky mistakes.

That made me think. Monopoly was a good game. It manages to keep hyperactive me and my very aggressive cousin not only engaged for hours, but also manages to maintain an even playing field despite our different styles. It probably isn’t the best board game ever, but it is one of the better ones, especially considering its age. So here we are, for one of the lasts posts of this year, an homage to the Ebenezer Scrooge of board games: Monopoly.

To cut to the chase, if you’re looking for a great, nostalgia-filled retro version of classic Monopoly, I recommend the

. But to get a feel for all your options, read on… . And surprisingly it’s not all that flashy, but the details are cool. There are eight different tokens to choose from, each with a classy and antique finish.

“Retro style” board and playing cards. I put retro because it just looks like

, it’s austere, simple, non-flashy. I really like this cool minimalist design — why did we have to go overboard with recent editions? Anyway, if I had to choose a Monopoly despite all the different themed versions, I would get this one. But maybe that’s just my age showing.

Damn, I just made 30 sound like the new 60. In many ways, this is one of the best Monopoly editions we have available right now because it keeps the initial simplicity and adds just enough to be unique and special. Nostalgia aside, if you like the game but the robber baron theme just hits too close to politics, a good variant is

. The cards and gameplay have small nods to the GoT universe. The tokens are cool especially the white walker and wolf. Another nice feature is the map of Westeros that is actually good to have around when watching the show!

Update: my girlfriend actually bought me this Monopoly set because apparently I couldn’t stop talking about how cool that map looked. It’s a major pull to this version that despite the number of variants, I can still get excited over a GoT themed version. 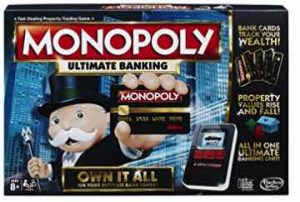 This is where the flash starts.

is a paperless game based on money. Someone once said that reinventing the wheel is not good enough, so we’ll put everything on a triangle and force it to work.

The whole point of a money game is that it’s immediately relatable, your score isn’t an abstract number somewhere, but a real life material object that you equated value to.

Well, instead of money that’s exactly what you get. An LCD with numbers. Don’t get me wrong, the sound effects are great, and It’s amazing that the game is so affordable despite including an electronic unit, but it just doesn’t feel like a Monopoly. Otherwise, it’s got some really high-quality materials, and the dice are very nice, so if you hated the math and hassle of money (in a money game) you might actually like this. Of course, a game about barons of industry and real estate has to have an

. And it looks really good. The integrated storage drawers are a very nice touch. The figurines and buildings are very nice, and the gold touches feel very… Donald Trump.

If you really like Monopoly, this is perfect for you. But at the end of the day, it’s just Monopoly so justifying the price tag is really hard for me. Some extra features and maybe a banking option like the previous version would have made more sense.

Now the winning feature is the drawers. All the pieces store away and what remains is a nicely finished playing set that you can keep on your coffee table as a quirky centerpiece. It really wouldn’t be all that out of place among other wooden finishing for the Monopoly friend with exquisite taste in home decorations; this is the best Monopoly edition or at least the only one you can match with your liquor cabinet. Well, culture is what we make of it. And Nintendo characters are everywhere. It was inevitable there would someday be

. The most interesting fact about this version is that the buildings are called upgrades and the building spaces are Nintendo characters. So you’re kinda feeding the characters while moving around.

This is probably the best Monopoly edition if you have a kid that is into everything Nintendo. It resonates more with kids than the more abstract original version of the game. I personally I prefer the rich guy in a tux to Mario the plumber, but I can see the appeal of softening the theme of rich tycoons and of targeting a younger audience. Be careful; the game contains small pieces that can become a choking hazard. So 3 years and up. is definitely the best Monopoly edition when it comes to the artwork. It’s really gorgeous. It’s a bit too colorful for my tastes, but the detail in the artwork is really good. The style is that of the comic book, which if you missed it is one of the best looking comic books in recent time.

If you want a Monopoly game that looks good, this is the one to get. The rules are mainly the same with some small modifications to keep with the theme and help with the role play. Now this works well because unlike other themed sets; they took the theme, not the characters without context. This is why I salute the makers for going with the more artistically rich comic book theme than the TV show. It just gives you more to work with, and you can expand on that initial product. Keeping with the theme of great themes and artwork, we have the

. There’s tons of customization in this, and it feels like a different game, but with the same rules and gameplay and the same familiar color bars on top of the properties.

This is probably a best seller just because of the artwork and the Blizzard fans, but for a good reason. And that brings me to my views on variations on a certain board game. I have no issues with merchandise as long as it’s not a cheaply made copy upon which you just tag some action figures. That’s lazy design and brings nothing new to the player. A theme game like World of Warcraft should be able to mingle among other game merchandise and be at home beside the original product. World of Warcraft Ultimate edition manages that. And that’s why this is a great complement to the collection of a WoW fan.

As I mentioned before, my best pick overall is the

, so check out if you haven’t decided yet. Or if you or someone you’re buying for is a big fan of the shows/themes above, definitely give those a look.

If you’re shopping for kiddos and want to find out more about Monopoly Junior and the like, have a look at my full breakdown of kids games.

And finally, if you’re curious about some of the weirder Monopoly versions, check out this amusing video.

Besides running his own welding shop and teach welding at a vocational high school, Jason's passions include gaming and board games.
Follow Us
Latest Articles