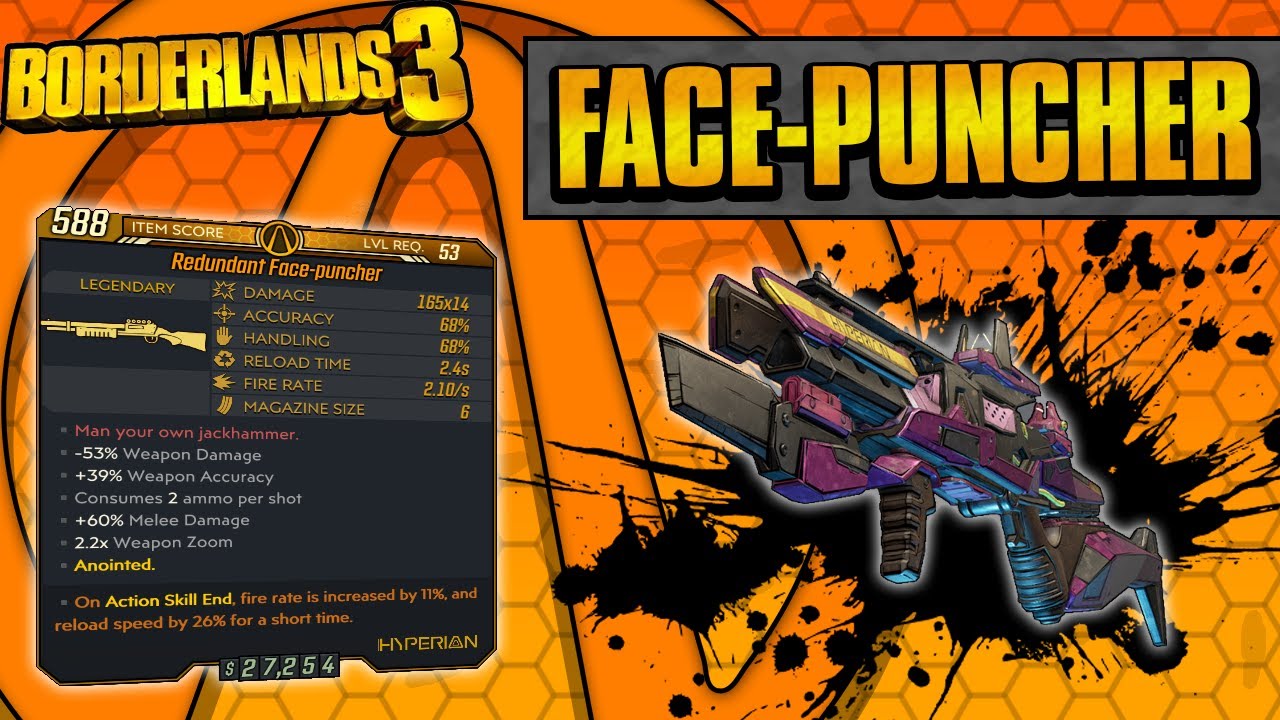 Borderlands 3 is a first-person shooter roleplaying game focused on looting gear, similar to roleplaying games like the Diablo series. Looting for an exciting arsenal of various categories from common to Legendary is rewarding, even if you have a character and class that is primarily suited for Melee Damage. So, what is Face-puncher, and how do you get hold of it?

Face-puncher is a Legendary shotgun that deals Melee Damage. It comes in two variants known as the Deep-dive Face-puncher and the Redundant Face-puncher. It is found within randomized loot sources but is easier to be farmed from the bosses such as Handsome Jackie or Muldock, the Anointed.

There is much more to this Legendary shotgun than just what is said above. Below you will find detailed information on both versions of the Face-puncher shotgun. This information comprises of Face-puncher’s statistics, recommended bosses to be farmed from, and an easter egg included in the game.

What is the Legendary Face-Puncher in Borderlands 3?

The legendary Face-puncher is a shotgun that focuses on dealing melee-based damage. Hence the name “puncher” in Face-puncher.

Hyperion, an in-game weapon manufacturer, manufactures Face-puncher. Hyperion’s weapons, including Face-puncher, come with a shield that appears when aiming the shotgun down sights. Face-puncher’s shield adsorbs the pellets fired at you then converts them into bullets for your weapon’s magazine.

There are two variations of the shotgun: the Deep-dive Face-puncher and the Redundant Face-puncher.

Face-puncher is a purple shotgun with a yellow stripe. On the yellow stripe is the name of its in-game weapon manufacturer Hyperion.

What are the Detailed Statistics of Face-Puncher?

Below are the detailed weapon statistics of the Deep-dive Face-puncher and the Redundant Face-puncher:

Which Variation of Face-Puncher is Better?

How to Find Face-Puncher in Borderlands 3?

Face-puncher can either come up in randomized loot, but this is rare for a Legendary weapon. This randomized loot could be in weapon caches. The better option would be to attempt to farm it from two in-game bosses. Farming in Borderlands 3 is when you go back to fight certain bosses that respawn after you leave the area until they drop the desired loot that you are after.

You are bound to get the Face-puncher quicker by farming it from those two bosses. You are not likely to find a particular Legendary weapon you are looking for by looting weapon caches.

Does Face-Puncher Have Any Easter Eggs?

Face-puncher contains an easter egg within in its description. Its red flavor text says, “Man your own jackhammer,” which references the song’s lyric of In Keeping Secrets of Silent Earth: 3. It is a song by the popular progressive rock band Coheed and Cambria. This flavor text is not the only easter egg in the game.

There are many more exciting easter eggs to find in Borderlands 3. One of my favorite easter eggs is the bulky shotgun called the One Punch Chump, which references the popular anime, One Punch Man.

Why is Face-Puncher Described as Legendary?

Face-puncher is not just considered Legendary because of its uniqueness in using your Melee Damage. It is because the shotgun is so rare to find. Legendary items are the rarest loot to find within the game. Below is a list of loot categories, listed from common to rarest and their designated prompt color:

Face-puncher is a great Legendary shotgun that I would highly recommend to you if you are focusing on building a significant melee-based character and are looking for a powerful shotgun to add to your arsenal.