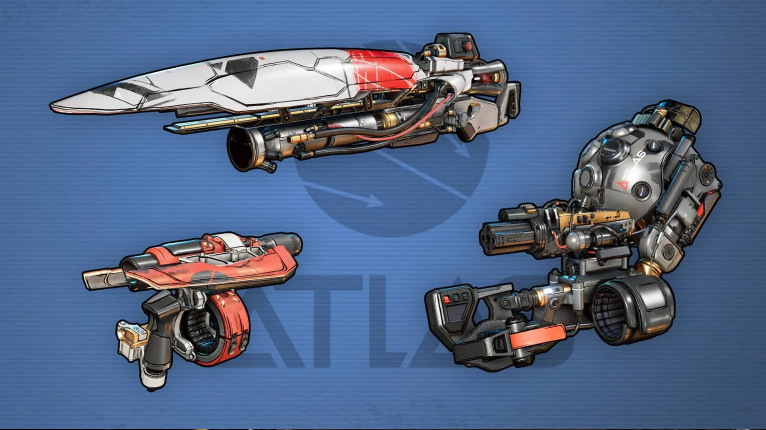 The weapons in Borderlands 3 are just crazy. Borderlands 3 blasts well beyond the norm set by the previous games in the series, throwing an arsenal of guns at you during its extended campaign. Each has a unique set of qualities and effects that may alter how the gun operates. So, what weapons can you find in Borderlands 3?

In Borderlands 3, there are six distinct sorts of weapons, each of which uses a different type of ammo, comes in different rarities, and has different manufacturers. Shotguns, Pistols, Assault Rifles, Submachine Guns (SMGs), Sniper Rifles, and Rocket Launchers are examples of these weapons.

Throughout the campaign and afterward, Borderlands 3 will throw as many weapons as bullets your way. The game features a plethora of interconnected algorithms that work together to randomly produce unique loot from different manufacturers when you’re out and about. With that said, who are the different manufacturers?

Who Are The Different Manufacturers And What Do They Do?

Borderlands 3 has nearly one billion randomly generated weapons, and every fight is an opportunity to add to your armory. Some firearms fire exploding sawblades, others never need to be reloaded, while still other weapons develop legs and chase adversaries on foot when thrown.

For the most part, they all play the roles you’d expect: Generally, when you think shotgun, you think close-range damage, and Sniper Rifles are excellent for long-range sharpshooting and crits.

SMGs have a rapid firing rate and are best at close range, whereas assault rifles are adaptable at most ranges. You get the picture. However, due to the random and insane nature of the procedural creation of firearms in Borderlands 3, deviations to this rule are standardized.

Much of this is also due to the weapon makers. There are a total of nine manufacturers or brands, each focusing on a particular mechanic or feature of gunplay:

What Do We Need To Know About Borderlands 3 Weapons?

Throughout the campaign and then after, Borderlands 3 will throw many firearms your way. With far too many firearms to count, the game features a plethora of various interconnected algorithms that work together to produce unique loot for you on the fly randomly. Among these systems are:

There is also a classification of guns based on color or rarity, ranging from common (white) through uncommon (green), rare (blue), epic (purple), and legendary (Gold). Each weapon is supposed to increase in stats depending on the level requirement.

However, you may come across drops of common and uncommon items that may be more powerful than their higher rare-tier counterparts.

If you’ve not noticed already, red rarity weapons can also be found in sporadic cases. Alternatively, they may attempt to be gambled on multiple slot machines throughout Borderlands 3, so winning a red labeled weapon remains a rare chance. These weapons are known as mythical weapons.

What Are Anointed Weapons And Gear?

Anointed weapons have also been discovered in Borderlands 3‘s endgame content, as well as a chest in the Proving Grounds.

You’ll be able to utilize them for Borderlands 3‘s endgame content, Mayhem–Mode, Proving Grounds, and Circle of Slaughter—as well as access it on your second playthrough and whatever else you choose to do once the final boss is defeated.

When you wield an Anointed weapon, you get a particular advantage or effect during or after using an Action Skill or another character-specific ability or action in certain circumstances. For example, “The following two magazines will have 50 percent more extra shock damage when your action skill ends.”

Some Anointed weapons are exclusive to a particular class or character. Instead of merely “Anointed,” they will mention “Anointed Beastmaster,” “Anointed Gunner,” “Anointed Operative,” or “Anointed Siren” in the description.

Many of these character-specific Anointed weapons will only trigger their unique effect when used in conjunction with a specific Action Skill, such as Amara’s Phasecast or Zane’s Digi-Clone.

Because Borderlands 3 anointed gear is available in all rarity levels, acquiring a legendary weapon should be extremely tough. Eridium is scarce, so don’t spend it all at once on a new rifle or shield; instead, save it for gear that suits your class and skill tree of choice so that you can profit from this fresh new category of treasure.

How Does Elemental Damage In Borderlands 3 Work?

Elements are a significant part of doing damage in Borderlands 3, as they were in previous Borderlands games. Both you and your foes have access to six distinct damage types, each of which does varying amounts of damage depending on the target’s health type.

Borderlands 3′s weaponry may do several sorts of harm to your opponents. Aside from the standard bullets that cause physical damage, the game also includes a range of elemental damages.

Kinetic, Fire, corrosive, shock, cold, and radiation are examples of these elements. Each one has a distinct personality and specializes in inflicting damage to particular foes.

Throughout Borderlands 3, you will meet a wide variety of enemies. Each of them has its unique set of powers, behaviors, and flaws. However, they all have a life bar, which is where the elemental damage comes into play.

Because there are three different sorts of life bars in Borderlands 3, you were given a standard health gauge, an armored gauge, and a shield gauge. Each of these gauges has advantages and disadvantages. While dealing harm with one element, another element deals less damage.

Physical damage is effective against all enemies. It does not have any unique qualities, but it also has no flaws—bullets, explosives, and melee strikes all deal kinetic damage. Kinetic damage also delivers standard damage to everything except armor, which takes a -20% per hit.

Corrosive damage is exceptionally effective against armor and causes opponents to melt. Melting does a lot of damage over a short period (7 seconds). Corrosive damage does +50% damage to armor, but -20% and -30% damage to Flesh and Shields, respectively.

Damage causes +20 % Armor damage, but standard damage to flesh and -30 %  damage to shields.

Targets can become Irradiated as a result of radiation damage. For 8 seconds, irradiated foes deliver Aura Damage to adjacent adversaries. When an Irradiated opponent dies, they burst, Irradiating all foes in the blast radius. Flesh and Shields take regular damage, but armor takes a -30 % hit.

The different (elemental) types are more effective against different opponents. You are up against opponents with more health stats, shields, armor, or a mix of these gauges.

What Are The Top 3 Most Powerful Weapons In Borderlands 3?

These weapons are found at specific locations as well as in random world drops. However, Before looking for these weapons, I recommend waiting until you’re at a higher level.

Gear in Borderlands 3 scales with your level, and some of these weapons are available early on. If you do find a legendary weapon early into the game, keep in mind that they’ll rapidly become outclassed as you level up even with regular gear.

One of these weapons requires Mayhem 6 or higher. After completing Borderlands 3‘s main story, Mayhem Mode becomes available. It’s advisable to finish the tale and reach the level cap before pursuing any of these weapons if you haven’t already. Here are the top three:

The Monarch is Vladof’s first and only weapon. As the name suggests, it’s a posh legendary assault rifle only available on Mayhem 6 or higher. Its unique weapon effect is “the monarch’s lethal sting!” In Borderlands 3, the Monarch can spawn with any of the five elemental damage kinds, but that’s not the point.

At the expense of a single assault rifle cartridge, the special weapon effect increases damage and shoots between three and ten rounds. When mounted, the Monarch spawns with a bipod attachment and delivers twice the damage. It can also spawn without receiving any elemental damage attributes.

The Monarch’s accuracy is its weakness, with a broad spread that produces a square shape. The Monarch is excellent in short- to mid-range engagements, although you may lessen the spread by utilizing the bipod.

To get the weapon, you’ll need to defeat Killavolt in Lectra City on Promethea. You’ll require Mayhem level six or above to locate the weapon, as previously stated.

Torque’s renowned shotgun, the Lob, is legendary. It can kill almost everything with a single shot, yet it may be damaged by cyro, corrosive, radiation, shock, or incendiary elements.

The unique weapon effect is “everything needs to be magical,” which means the gun will consistently deliver elemental damage and have a larger magazine capacity. It does not, however, spray pellets.

Instead, the Lob launches a giant sphere that travels slowly across the battlefield before exploding on hit, delivering enormous AoE damage. It’s a random global drop, although farming Graveward is the best approach for getting it. Graveward may be found towards the end of Chapter 16, Cold as the Grave.

Crossroad is a legendary SMG from Hyperion. It may be dropped with cryo, shock, corrosive, incendiary, or radiation elements, and each shot shoots three projectiles. The unique weapon effect “open the fate for me” is responsible for this. The Crossroad weapon fires three bullets per shot in bursts of six rounds.

However, it only uses two ammunition each shot, letting you do a lot of damage in a short amount of time. Unfortunately, it’s a global drop at random. Katagawa Jr., on the other hand, has been known to have a reasonable higher probability of dropping it.

This early game boss may be found at Atlas HQ in Chapter 3; however, he won’t drop Crossroad just yet. The ideal method is to wait until you reach level 60 before attempting to farm Katagawa Jr.

Borderlands 3 is one of the most inventive games that include gear-generating algorithms. Every time you uncover a new weapon, there are many more factors to consider than simply the standard damage.

As you accustom yourself to Borderlands 3, all these factors become critical and assist you in incorporating the game sense into other games.

When you start a new playthrough, the probability of scoring the same weapons is slim to none, which is, in my opinion, a compelling game-developing strategy. And speaks wonders to you, the player, journeying forward.