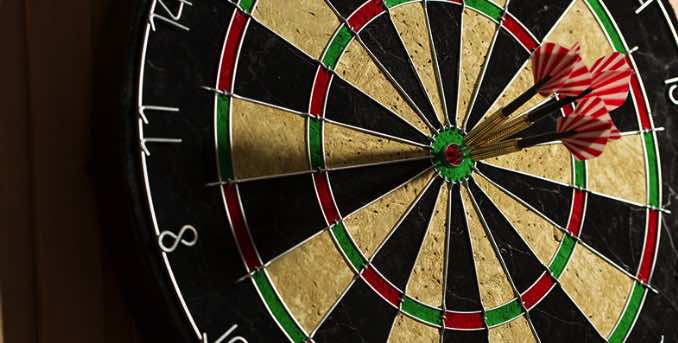 Darts is a game that has been around awhile, but it’s one of those things where a lot of people think they know how to play—as long as they can hit the bullseye. But they aren’t actually aware of the true intricacies of the game—or that there are multiple popular darts games, each with their own unique quirks and sets of rules.

Generally, darts is played with two or more players, or even teams of players, depending on the game. Three darts and a dart board are pretty much universal throughout any dart game, so no matter which rules you’re following, those are darts essentials.

Getting started: how far do you stand from a dart board?

One of the most confusing things for players new to the game of darts is figuring out how far away to stand from the dartboard. The spot from which players throw darts is called the “oche”, and this somewhat obscure term is likely what gives most novice players pause. Nowadays, the oche is often called the “throw line” or the “toe line” and most terms are widely used and accepted, especially since they’re very descriptive of where you should be standing. For steel tipped darts, the World Darts Federation says that the throw line should be 7ft 2.25in from the face of the dartboard, which is key, because some dart boards protrude from the wall, so if you measure from the wall to the toe line instead, you’d end up much closer to the dartboard face than you should be.

The oche is standard for all steel-tipped dart games, regardless of which one you play. There are a lot of variations to dig into, and throwing from the right spot is key to becoming a great darts player. Below is a breakdown of popular darts games and their rules.

The most common ’01 dart game is 501, which is the standard game of the Professional Darts Corporation. There are other variations, such as 701 and 301, etc.; the reason they’re called “’01 games” is because, as you may have noticed, each one ends in those two digits, and it’s a big part of how the game is played and ultimately won.

The goal of an ’01 game, most simply, is to be the first player (or team) to reach zero from whatever the beginning score was. For instance, if you’re playing 501, you’d have to reach zero from that point. 301 games are a popular variation simply because they’re an abbreviated form of 501 and take less time to play.

You have to hit a double on your last turn in most standard rules of the game. (For instance, if you need 20 to win, you’d need to throw two 10’s.) If you don’t hit a double, your score is reset and you have to try again in order to win. Some variations of the game may require double in/double out as well, so you’d have to throw a double to start the game as well as win it.

51 by 5’s works on a similar principle to 01 games, except that a player’s three darts must be divisible by 5. This game is popular because not only do you have to have skill in throwing accuracy, you have to constantly keep in mind the numbers you’re throwing and do some thinking in order to win.

Shanghai is a darts game that requires a lot of skill, because not only do you have to hit doubles to play, you have to hit triples to win. There are typically 7 rounds in a game; the first round starts on the first darts section, the second on the second section, and continues until the game is through. You win Shanghai by hitting a single, double and triple. They can be in any order; some variations may require you to hit them in a specific sequence to make things more interesting, however.

There are a lot of popular darts games out there, but the most popular the world over is the ’01 games, particularly 501. If you’re learning how to score a dart game, sticking with the ’01 category is a great place to start and earn your chops. More eccentric darts games are usually reserved for fun purposes (such as pub night), while the game of 501 is such a long-term favorite in the world of darts that there are even world championships devoted to it.