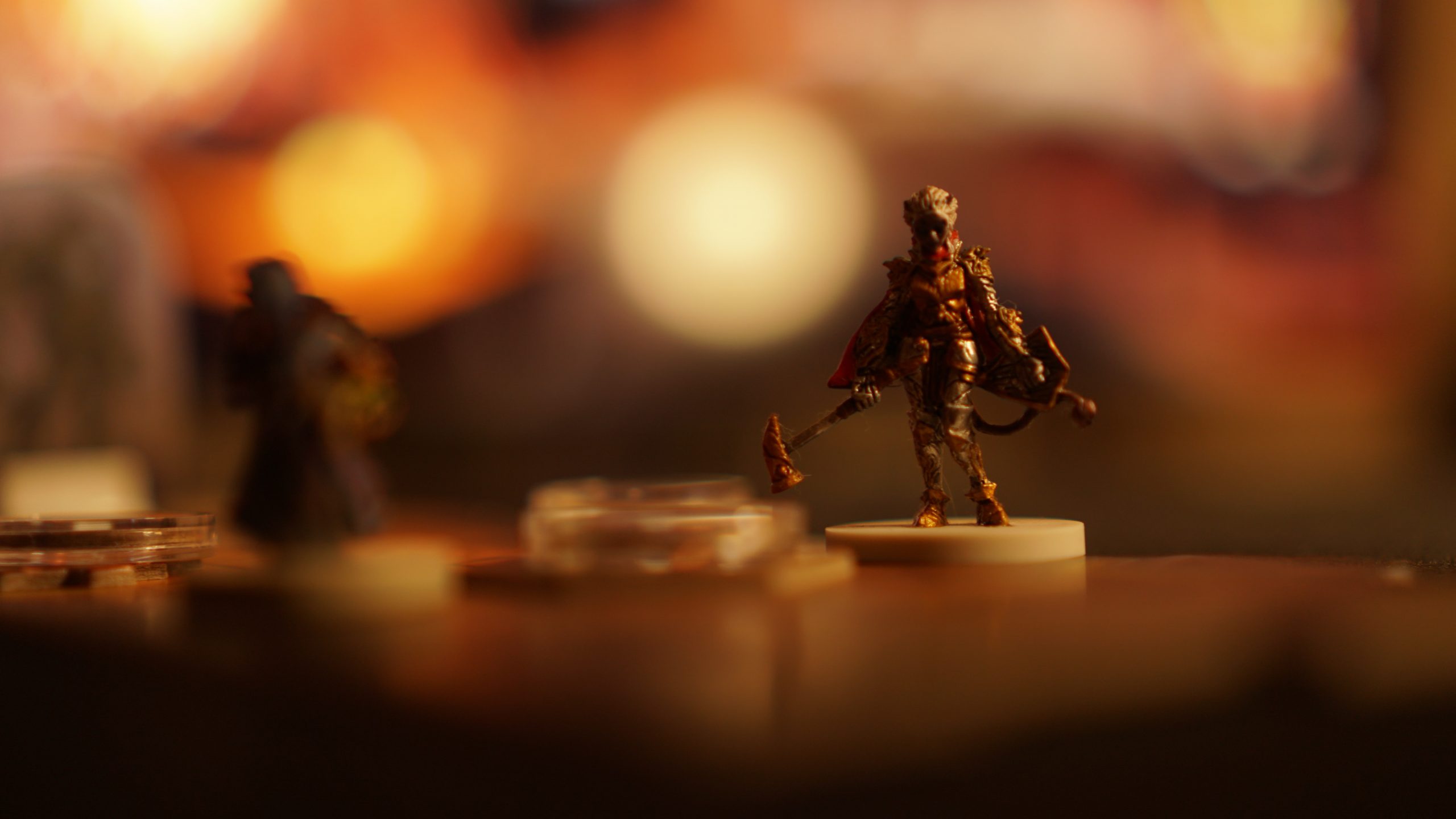 Your Gloomhaven group is going strong.  You assemble weekly with a vast supply of chips and beer, and your little invite-only sessions have become the talk of the town.  There’s even a waiting list.  In this parallel universe where you have too many friends for a standard four-player nerdfest, you want to expand but don’t know if you can.

It is entirely possible to play Gloomhaven with five players.  There are even some official recommendations from the Gloomhaven creator himself, Isaac Childers, which include turning up the difficulty by two levels, but keeping the rewards and experience earned unchained.

As you know, Gloomhaven is basically finely balanced chaos.  Although it is possible, and even fun, to add another character, it does come with a whole batch of added challenges and risks.  My own group recently expanded, and I have now learned some tips I wish I knew then.

What You Will Need to Add Player 5

The most important thing you will need is a fifth character modifier deck, and because Gloomhaven only has four in the box, that means either buying one, printing one, or downloading one.

If you prefer to go the classy route, buying one is the way to go.  There are several places such as eBay and Etsy where you can purchase a shiny new modifier deck.  Alternatively, you can download one and print it out.  Keep in mind that a printed deck will not look or feel as great, and is bound to have more defects that make certain cards easier to spot.

The final, and easiest option is to download one of several modifier deck smartphone apps.  However, there is something strangely satisfying about having to physically turn a modifier card and watch as your attack misses and you lose the game.

I would also suggest that you either buy or innovate an extra character organizer tray.  Gloomhaven is a BIG game, and I can’t imagine the frustration of playing it without an organizer.  It will add frustration to your overall experience to have an additional character’s nuts and bolts floating loosely around your table. 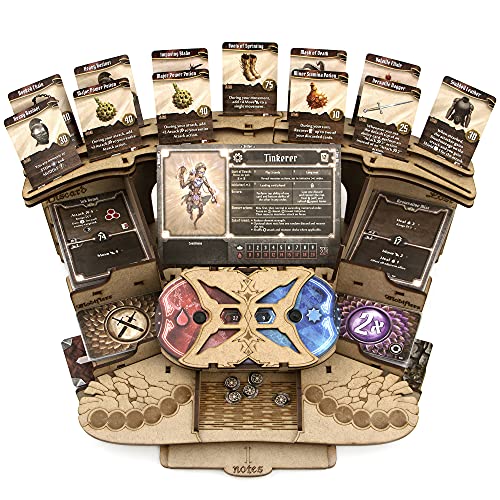 Your character composition is going to be particularly important if you are playing with five players.  I recently started playing the Gloomhaven PC game, and it was only when I saw those room tiles in all their three-dimensional glory that I fully understood how insanely tight the space could be.  And that’s with four characters.

Adding another character is going to turn those Tank-in-the-doorway blockages into rush-hour traffic jams.  If, on top of that, the majority of the group are melee characters, you are going to have a beautifully frustrating experience as you are forced to go turn after turn stuck behind Brute, never landing a blow.

If you want to play melee characters, make sure that they are characters that can jump, which will allow them to get land some attacks behind those blockages.

With space in mind, it should be obvious that summon-focused characters are not the way to go with five players, unless you want to be exhausted in the doorway of the first room.  Other characters, like Cragheart, who specialize in creating obstacles, may also add… well “obstacles,” making the game cumbersome.

In my opinion, you’re best off with two ranged classes (one of which is a mage or AOE class), a tank, a melee class that can jump, and a support class.  The best support class option here, probably by far, is the Music Note (Soothsinger) class.  She is my favorite class in the entire game so take that advice with a sprinkle of bias.

Decide Who Gets Which Item 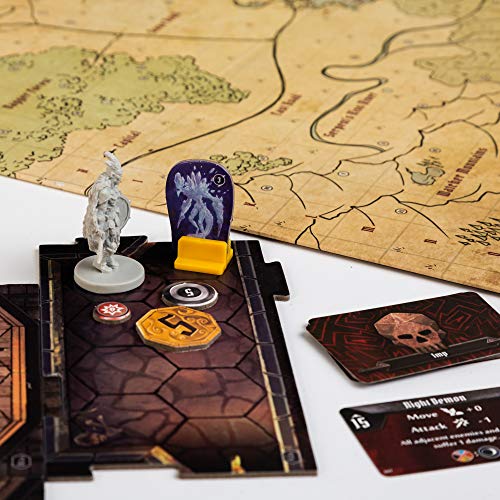 If you are not careful and methodical, the process of picking items may cause a fair amount of friction in your group.  Remember, Gloomhaven was designed as a four-player game, and the number of each item available reflects that.

Consider your various characters and their role carefully when deciding who gets that stamina potion, health potion, or medallion of super-awesome-epic-power.  Items should be prioritized to the characters so that the entire group benefits, not just any single character.  Play to each character class‘s strength, and you should be fine.

The game is set, the team assembled, the modifiers locked and loaded, the potions bottled, and the time has come to hit the road and go dungeon-diving.

Road and City events will be a lot easier simply because you have a larger, more diverse group of characters on the board.  You are far more likely to have a needed character class for an optimal ending in these events.  You may be happy with this advantage, depending on your group.

If not, James Brown from Neural Net Games suggests designating, at random, an “extra player” before each city or road event.  That person’s character is then not counted for that event, so that you stick to the four-player design of these encounters.

After that, you will finally get to the actual scenario/mission.  The official suggestion from creator Isaac Childers is to turn up the difficulty by two but keep the rewards (gold, experience, etc.) the same.  With the difficulty ramped up, there won’t be more enemies on the board, but those that are there will be much harder to kill.

They will also hit harder. A lot harder.  Enemies such as AOEs and bosses that deal damage based on the number of characters will be nothing short of brutal, with added 20% effect that comes from a fifth player.  Bosses’ health will also increase by 20%, making killing them a good deal harder.

A Tip for Managing Time

It’s strange when your wife calls you at 2 am asking, “Where are you?!” and realizing two things: One, you’ve been playing a board game for 8 hours straight, and two, you are very fortunate to be one of few people who play board games for 8 hours who also has a wife.

In addition to bragging to my fellow gamers here, my point is that Gloomhaven takes a LONG time.  If your group is anything like mine, there is a real case of over-planning. You constantly try to create synergic perfection with every round.  Add a fifth player to that, and you have a problem.

How you are going to manage that is going to be your call as a group.  I have often suggested to my group (even when we are four) that it would be interesting to make a house rule of only allowing 30 seconds to discuss strategy and 30 seconds to choose cards.  You could use a 30 Seconds (the game) ‘hour’ glass to time this.

Whatever you opt for, house rules regarding time are going to be crucial if you hope to actually complete a scenario.

Here is a detailed video on adding a fifth player

An Alternative Idea for 5 Player Gloomhaven

There is another idea for a fifth player in Gloomhaven that I have been thinking about for a while.  It involves the fifth player being the DM (Dungeon Master) and thereby controlling the monsters.

My own idea relates to creating specific house rules that will give the DM an amount of control over the monster AI, thereby creating a very real, thinking, and potentially sadistic foe.

Allowing the DM to ignore the initiative focus, for example, could make for a challenging experience, which may obviously break the game.  I wouldn’t know since my group is too scared to test my mad conspiracies.

Gloomhaven is my favorite board game to ever come into existence.  It is the closest thing to co-op, fantasy RPG PC game on a table that I have seen.  If you are like me, you want to share your love for Gloomhaven (and the upcoming Frosthaven) with as many friends as you can get to bite the bait.

Fortunately, it is not only possible to play with five players but can even be fun.  Just don’t be too eager to add more than five, because the challenges mentioned above will be amplified to a breaking point.

If you love Gloomhaven and want our suggestions for a few more games to try, check out our list here.