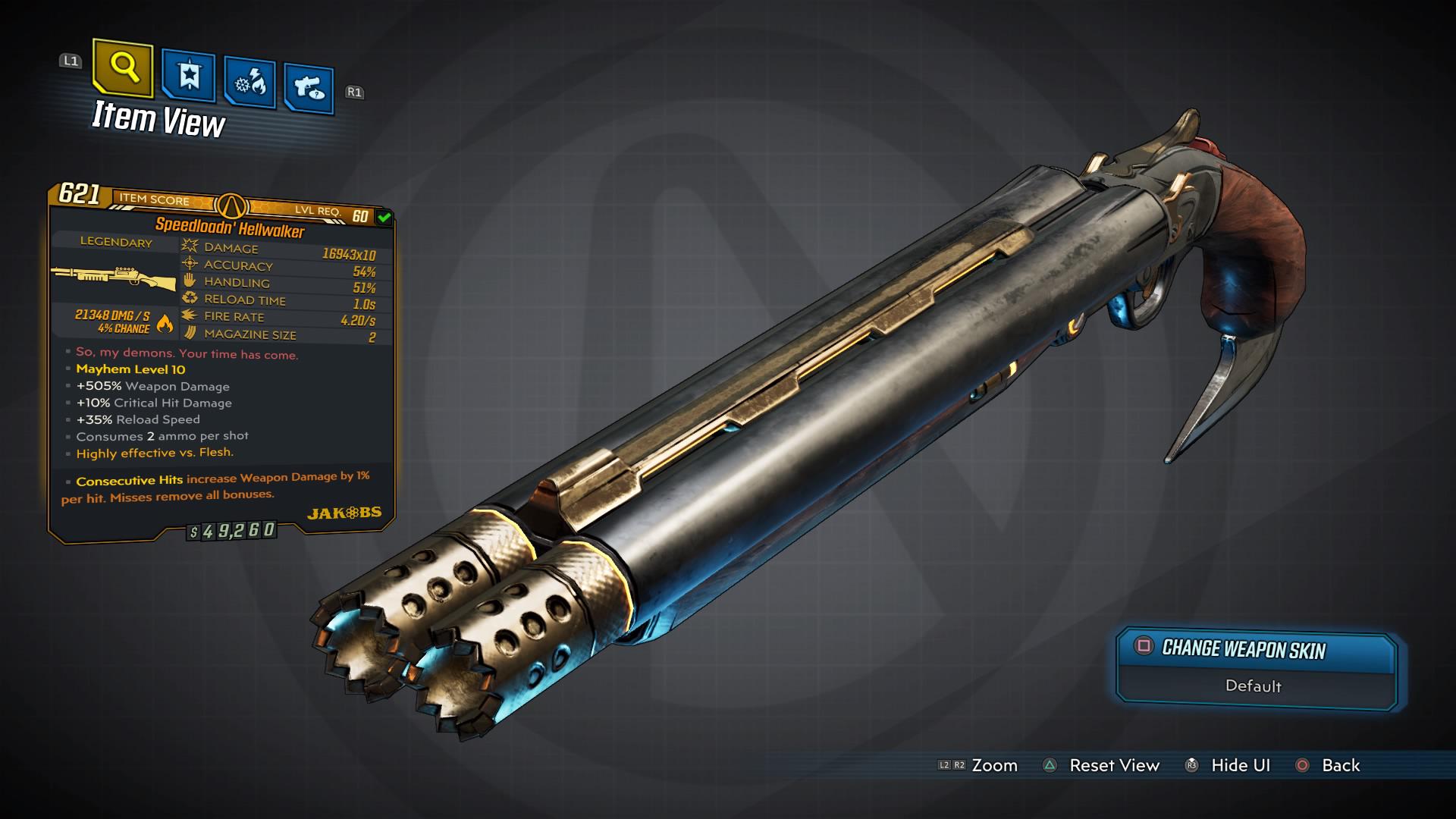 The roleplaying first-person shooter game Borderlands 3 has many wacky and powerful arsenal available to loot during your grand adventure as one of the four Vault Hunters. These arsenals range from common weapons to more rare weapons, like it’s Legendary compatriot, the Face-Puncher. Some of these rare weapons are not only powerful but peculiar in more than one way.

Hellwalker is a powerful Legendary shotgun in Borderlands 3 that acts as an easter egg to the Doom series, a popular first-person shooter game. The weapons manufacturer Jacobs created it. Hellwalker shoots Incendiary pellets that have significant Critical Hit Damage.

Hellwalker has many more traits that make it a powerful legendary shotgun. Its category as Legendary speaks to its rarity, impressive stats and, unique role as an easter egg to the critically acclaimed Doom series. As seen by its category, it is one of the rarest weapons to seek in Borderlands 3, but one well worth finding with the right strategy.

What Makes Hellwalker “Legendary” in Borderlands 3?

Hellwalker is a Legendary shotgun, both in category and effectiveness, in Borderlands 3. It is one of the many pieces of arsenal that you can loot in this first-person shooter roleplaying video game that borrows aspects such as looting weapons from roleplaying games like Diablo. It is also an easter egg reference to the popular first-person shooter video game franchise Doom.

Although the weapon is classified as Legendary because it is one of the rarest weapons in the game, I consider it to be legendary for several reasons.

What are Hellwalker’s Description and Weapon Statistics?

The Hellwalker shotgun was manufactured by Jacobs, one of the many in-game weapon manufacturing companies. All these companies have different notable attributes for their weapons. Most of Jacobs’ weapons catalog does not feature weapons that shoot elemental pellets. Instead, they have high Critical Hit Damage. Hellwalker is one of the few exceptions to the rule, since it shoots incendiary ammo.

The Hellwalker shotgun does not have the best accuracy but makes up for it by causing high amounts of close-range damage. As seen below, it causes high Critical Hit Damage that shoots incendiary bullets.  The Hellwalker shotgun ricochets one pellet at an enemy nearby per Critical Hit.  It also knocks back unarmored enemies and burns their flesh with its incendiary ammo, which causes significant damage.

The weapon has a magazine of two and consumes two pellets per shot. This small magazine might sound like a terrible ripoff, but it makes up for it in its fast-reloading speed justified by its “speedloadn” prefix.

How is Hellwalker a reference to the Doom Franchise?

Hellwalker’s description, which says, “So, my demons. Your time has come,” is the first of many easter egg references to the Super Shotgun in the Doom video game franchise. The Hellwalker and Super Shotgun are double-barreled shotguns almost identical in appearance to another.

The Doom franchise resolves around the armored warrior dubbed Doom Slayer’s quest to destroy all demons invading Mars from Hell. The Super Shotgun is his most famous weapon.

Every time the gun is fired, you hear a part of the song BFG Division from the Doom (2016) soundtrack by Mick Gordon.

The reference extends to the rounds it fires as it shoots incendiary rounds. Incendiary pellets are a subtle reference to Doom as you are fighting demons from a fiery hell in the Doom franchise.

From the game’s description to the ammo it fires, the Hellwalker is major shoutout to the Super Shotgun from the Doom series.

Where to Find Hellwalker in Borderlands 3?

The Hellwalker is a Legendary weapon in Borderlands 3. It occasionally appears in loot drops, but going down this root of just looting for it will take you a very long time as it belongs to the rare Legendary category. There are easier ways to obtain the Hellwalker shotgun.

Another but expensive method is to try your hand at the various slot machines on the many planets of Borderlands 3. They cost in-game money, though. An easily accessible one is the one in Moxxi’s Bar aboard the Sanctuary III Starship. This method is a gamble, though, as it could take several times to get the Hellwalker shotgun and, therefore, several in-game dollars wasted.

By far, the easiest method is to keep fight Captain Traunt, who is known to drop it upon defeat.

Are There More Easter Egg-Based Weapons in Borderlands 3?

Several other weapons have little easter eggs beside the Hellwalker in Borderlands 3. The top three that I have encountered are listed below:

Why is Hellwalker Officially Categorized as Legendary?

Calling Hellwalker Legendary is not only appropriate just because of how great a weapon it is, plus the fact that it has the Doom references. It officially refers to its rarity. Legendary are the rarest type of weapon in the game and is marked by the orange color. The other weapons categories, including Legendary, are listed below:

Hellwalker is a powerful Legendary shotgun in Borderlands 3. It is also a weapon that references the Doom franchise in its appearance, sound, ammo, and description. Hellwalker is one of the rarest weapons out there, but it’s well worth finding.