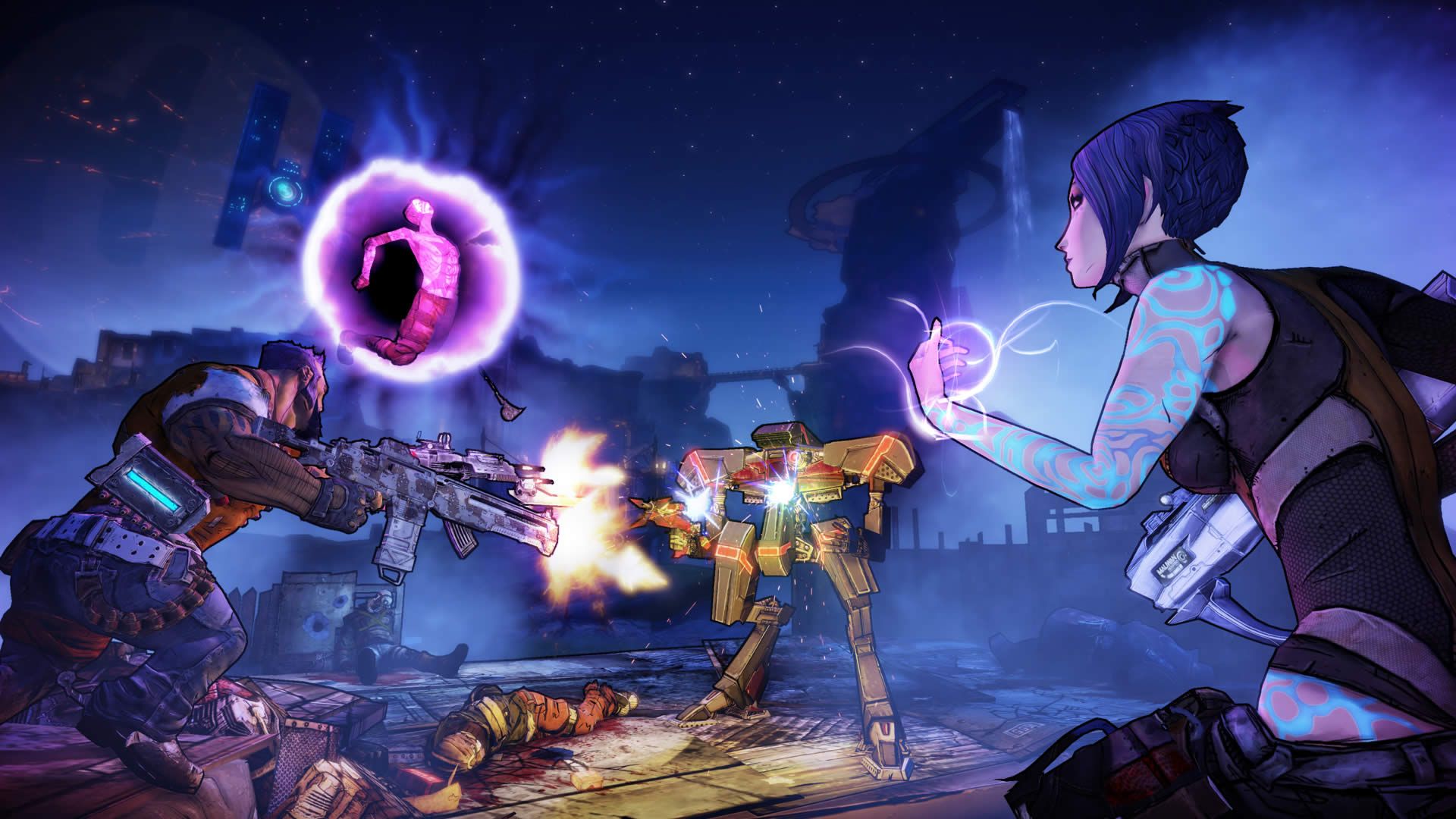 Borderlands 2 is considered by many, including me, as the best game in the first-person shooter roleplaying game franchise. It has a strong story, humorous dialogue, and, best of all, tremendous playable characters with their respective classes. Whether you play it solo or cooperatively, who is the best Borderlands 2 character?

The best character in Borderlands 2 is Maya the Siren. She has a diverse skill tree and the Phaselock Action Skill that benefit both a solo player needing to be strong enough to survive alone. Her powers are also helpful for cooperative players who need to support their team against enemies.

Who Are The Best Characters In Borderlands 2?

A Brief Overview Of The Events Of Borderlands 2:

Borderlands 2 is a first-person shooting roleplaying game that sees you take on the role as one of the six Vault Hunters on Pandora (four comes with the base game while the other two come as Downloadable Content). The Vault Hunter you choose joins with The Crimson Raiders to take down a man called Handsome Jack, the head of The Hyperion Corporation, who has brought destruction to the planet Pandora.

As one of the four Vault Hunters, you must defeat Handsome Jack and bring peace to Pandora.

Who Can You Play As In Borderlands 2?

All the Vault Hunters bring something unique to the game.

Maya comes from a sheltered life of living with the Order of the Impending Storm, the rulers of the planet Athenas.  She knew little about her role as a Siren. Maya found that the Order of the Impending Storm used her as a political pawn on her home planet and escaped from their clutches. Her escape led her to the planet Pandora. There she hoped to learn more about her lineage.

She soon joined up with The Crimson Raiders to fight for peace on Pandora.

If you level up Maya, who belongs to the Siren class, skill trees adequately, you will reap the benefits. Focusing on the Cataclysm and Motion skill trees can make Maya a dangerous character on the battlefield. Cataclysm focuses on elemental damage, which will help you take down the strongest foes easily. Motion, on the other hand, focuses on managing a large group of enemies and your defenses.

Her Phaselock Action Skill is beneficial for crowd control, which halts an enemy from attacking for a short while.

By leveling up your Cataclysm and Motion skill trees, you will become a mighty force against the most formidable foes.

Salvador was born and raised on the planet Pandora. He stands at the height of 5’4 ft, as his overuse of steroids halted his growth. Salvador loves killing bandits, but this action nearly got him executed in his hometown. His execution was stopped when a Hyperion strike team seized his town. Salvador soon found out about The Great Vault, which led him to become a Vault Hunter.  He shortly joined The Crimson Raiders to fight back against Handsome Jack’s tyranny.

This character, with his Gunzerker class, thrives on firepower and is excellent for close-quarters combat. Salvador’s Gunzerking Action Skill, which allows him to dual-wield two weapons simultaneously, is especially significant in close quarters combat. For this, I would focus on his Rampage and Gun Lust skill trees. They will enhance his dual-wielding Gunzerking Action Skill and significantly enhance the weapons he uses.

Salvador is better suited for smaller areas in the game and not open areas. I state this as he does not have a skill tree that significantly enhances his defensive abilities.

Unless you want a challenge, I would not recommend playing as him. Because of his limitation in vast open areas, you will end up dying a lot.

Zer0 makes his living as an assassin, focusing on both common hits and those involved in politics. He got involved as a Vault Hunter after growing bored with his job, as his hits refused to fight back. Zer0 soon got involved with The Crimson Raiders to free Pandora from Handsome Jack’s clutches.

This character is excellent with his Assassin class if you like to play a support and sniper role. Zer0 can easily pick off foes from a distance, but it involves a lot of strategies.

Zer0 is, unfortunately, not great in close-quarters combat. He works better as a support in a team with his Decepti0n Action Skill and excellent sniping skills.

Axton comes from the planet Hieronymous. There he sought personal glory in the Dahl military at the expense of the safety of others. Soon after reaching the rank of sergeant, Axton got dismissed from the army.  His dismissal was primarily for his disregard for the protection of others. His ex-wife and former commanding officer Sarah warned him that his dismissal would lead to him being executed, prompting him to flee.

Axton soon became a mercenary, and although he became wealthy, he was not satisfied. He soon became a Vault Hunter as his career as a mercenary did not give him any personal glory. On Pandora, he soon joined up with The Crimson Raiders to fight back against Handsome Jack.

Axton’s Commando class is very similar to your average first-person shooter character. This familiarity is in no way a con. He thrives on both mid-range and long-range damage. Axton is easy to play if you are familiar with the first-person shooter genre. His Sabre Turret Action Skill is excellent for taking out enemies in close-quarters combat.

Like Salvador, Axton unfortunately also struggles to be beneficial in more open areas. Nonetheless, he is still a great character to play with. He is a character that feels familiar with characters of other first-person shooter games, making him beneficial on the battlefield.

Krieg the Psycho is a playable character that is available as a DLC (Downloadable Content).

Krieg is a native of Pandora who was born into a family of bandits. To prove his abusive mother wrong because she thought he was powerless, he became the strongest in his family. Unfortunately, The Hyperion Corporation captured him and made him a Psycho, a deranged human mutant. Just when it seemed that most of his sanity was gone, an inner voice manifested to help him cope with the horrible experiments he endured.

Because of Krieg’s Psycho class, he focuses predominantly on close-range and strong melee damage.

Unfortunately, because his abilities are focused on close-range damage and melee-based, it is better to avoid him if you plan to play solo as you will die a lot. He can be a good character and class in a cooperative playthrough if you have a player or series of great players specializing in support, defense, and damage.

It is best to avoid Krieg altogether if you are new to Borderlands 2, as his abilities that focuses primarily on melee damage can be limiting.

Gaige, who belongs to the Mechromancer class, is another DLC character. She became a Vault Hunter after a tragic event.

After getting expelled from high school, she escaped to Pandora from Eden-5. On Pandora, she wanted to learn more about the planet, Eridium, and the Vaults. Her expulsion resulted from accidentally having Deathtrap, her robotic bodyguard, kill her rival at a science fair.

Gaige’s Mechromancer class allows her to deploy Deathtrap to take out a series of enemies quickly. This Action Skill makes her a good choice for solo players. Her Best Friends Forever Skill tree is beneficial to make Deathtrap stronger. Because your survival depends on Deathtrap, who can only stay on the battlefield for a short while, you must focus on adequately leveling up your skill trees.

Although Gaige is a powerful character with her bodyguard Deathtrap, I would not recommend her and her class for beginners. If you are an advanced player, she can be instrumental in focusing on damage and defense on the battlefield primarily.

Best Borderlands 2 Character, Other Than Maya, For Solo?

The best character for a solo playthrough, other than Maya, is Axton the Commando.

His Commando class skill trees that give an advantage in both mid-range and long-range damage, along with his defense skills, make him a great pick. What makes him one of the best characters to play solo with is his familiarity with how he plays to other first-person shooters. Because of this familiarity, it is easy to adapt to Axton, especially if it is your first playthrough.

For anybody playing solo, I would recommend that you pick a character and class with a robust deployable Action Skill. In the case of Axton, it is his Sabre Turret that will quickly help you take out hordes of enemies.

Best Borderlands 2 Character, Other Than Maya, For Co-Op?

Borderlands 2 is a game that is best enjoyed cooperatively with a team of players. I would recommend Maya, the Siren, for cooperative playthroughs, but somebody just as remarkable is Zer0 the Assassin.

Zer0 is especially beneficial if you are playing in a team of players specializing in mid-range and close-range damage. You, as Zer0, could help your team by picking off strong enemies from a distance with your sniping skills while they take out the rest. You could then make use of your Decepti0n Action Skill to even the odds if enemies become overwhelming for you and your team on the battlefield.

Zer0 is one of the best characters for a cooperative playthrough. With Zer0, you can support your teammates in heated firefights with your sniping skills. You, as Zer0, can also even the odds on the battlefield with the Action Skill Decepti0n.

Why Is Maya The Siren The Best Overall Character?

Maya the Siren is overall the best playable character in Borderlands 2 for both a cooperative and solo playthrough.

Not to mention someone with her enhanced elemental skills can easily rip through hordes of enemies in both a solo and cooperative playthrough.

Her skill trees, too, can make her a tremendous damage-based, defense-based, and survival-based character.

Maya the Siren is the best overall character because of her great customizable skill trees, enhanced elemental skills, and powerful Phaselock Action Skill.

How Many Players Can Play Borderlands 2 Cooperatively?

Because Borderlands 2 is predominantly a cooperative game, several players can play together at once. On a console, there is even a split-screen option. Unfortunately, on PC, you can only natively play cooperatively online or through LAN. The console version of the game includes the latter-mentioned options as well. Up to four players can play Borderlands 2 with these available options of collaborative play.

What Is The Best Edition Of Borderlands 2 To Buy?

It is available on:

The best character for playing Borderlands 2 is ultimately Maya the Siren. Her diverse and influential skill trees, significant elemental enhancements, and Phaselock Action Skill make her a force to be reckoned with in both a solo and cooperative playthrough. Two great solo and cooperative characters and classes, other than Maya, are respectively Axton the Commando and Zer0 the Assassin.

All the characters and classes of Borderlands 2 bring something unique to the table with their diverse skill sets. Despite this, Maya the Siren is the overall best character to play within a solo and cooperative playthrough.