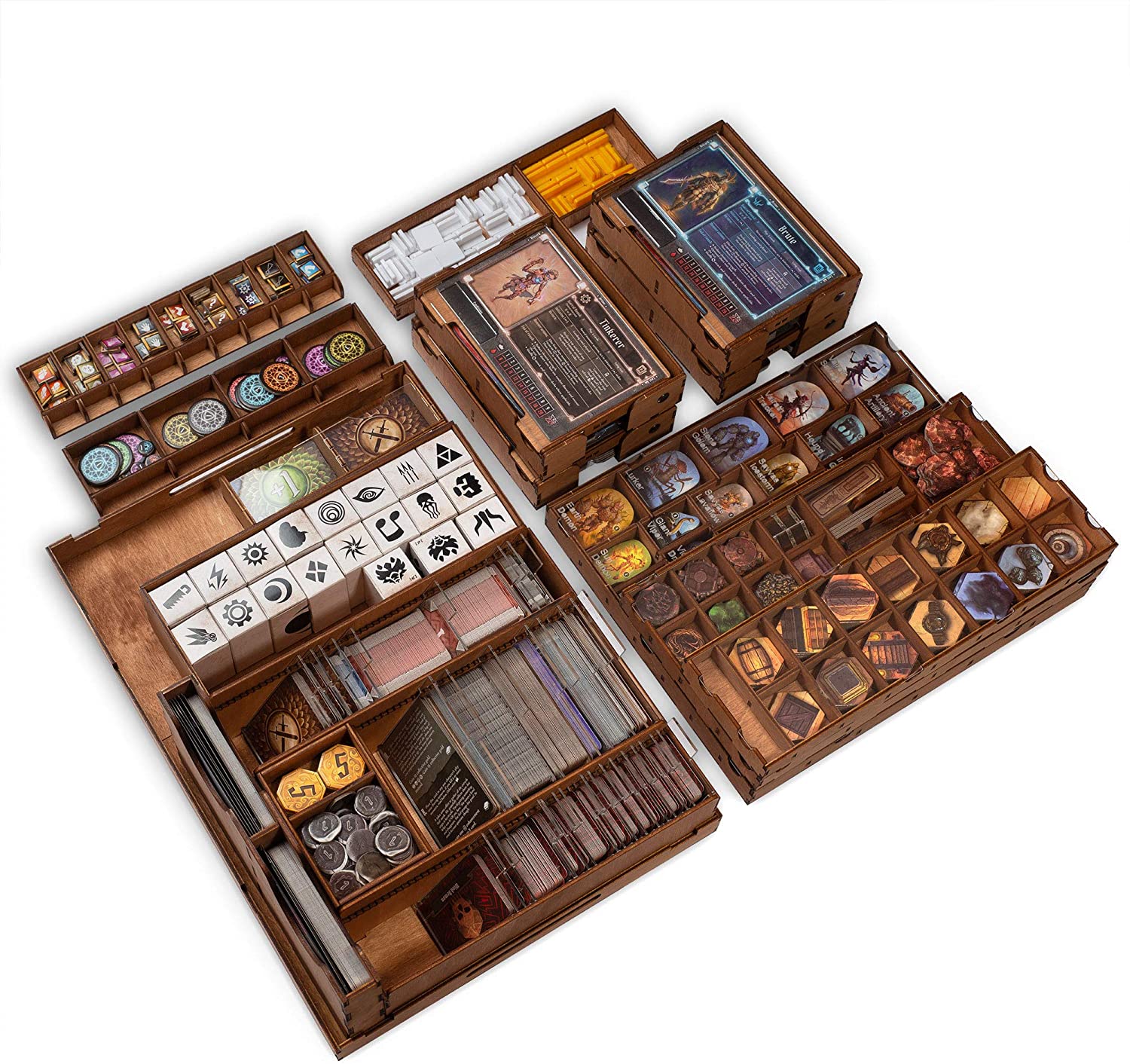 I remember the first time a friend invited me to play Gloomhaven.  Slowly opening the gargantuan box, he said, “OK, you need to pick a character to play.”  A near eternity later, I finally had my character picked, named, and laid out.  I was overwhelmed and tired.  And then he said, “Oh! One more thing… you need to buy your items.”

Gloomhaven items are pieces of equipment, weapons, armor, potions, and summons you can purchase from the market in Gloomhaven.  These items grant your character special bonuses and abilities, but sometimes at a cost.  Items can either add to your strengths or mitigate your weaknesses.

Gloomhaven is a famously big and infamously unwieldy game.  Playing it for the first time is quite daunting, and then, just when you think you are ready to plunge into your first scenario, you are faced with a market full of items.  Fear not, brave adventurer, for I will attempt to crash-course orientate you.

The Different Types Of Items

The first step to help you navigate all the items in Gloomhaven is to picture your character as literal.  You have a head, hands, torso, feet, and pockets.  And you have items that can be carried or equipped to each.

Helmets, for example, are quite obviously placed on the head; cloaks and armor on the torse; and shields and swords in the hands, etc.  You can only equip one helmet because you only have one head, although you may own as many as you like.  Likewise, you can only equip two single-handed or one double-handed weapon in your hands.

You also have pockets, which contain small items.  These small items include potions, magical objects, and even summons.  The number of pockets you have is equal to your character’s level, divided by two and rounded up.  In other words, a level four character will have two pockets, and a level five will have three.

Gloomhaven items can also be grouped into three over-arching use types:  permanent, spendable, and consumable items.

Permanent items grant your character perpetual benefits, such as having more pockets.   Spendable items can be used more than once but need to be refreshed by taking a long rest before being usable again.

Consumable items, such as potions and even certain weapons and armor, can only be used once during a scenario.  They can only be refreshed by certain magical items or abilities.

Here is a list of all the items available when you start a new Gloomhaven campaign.

How Do You Get Items?

The merchant in Gloomhaven sells items.  I say IN Gloomhaven with intent.  You may only purchase items while you are in the city of Gloomhaven before a Road Event en route to a quest.

Items are purchased with gold which you collect either as a reward for quests or as booty from looted corpses, slain by your ferocious hand.  Stronger items are more expensive than weaker ones, but you will be given discounts on prices as you progress and gain reputation.

When you start an entirely new Gloomhaven game, each character is given a small wallet of 30 gold with which you can buy your first few items before you go out adventuring.

When Can You Use Items?

It can be a little tricky to understand exactly when you may use items, but as long as you read the item description properly and apply a healthy amount of logic, you’ll be fine.

Armor, for example, is passive, even in the real world, but your armor comes into play when you are attacked, even though it isn’t your turn.  However, if you want to use an active item such as a potion or a weapon, you may only do so during your turn.

Certain items allow you to play them actively out of turn, but they will be clearly specified.  Permanent items are perpetually passive, so you never need to play for them to be active.

How Do You Choose Items?

The first character I played in Gloomhaven was Scoundrel.  When I reached her max level and eventually ended her career, my friend said to me, “you played her a lot different than I did, and brilliantly at that!”

It’s a true thing of beauty that in Gloomhaven, two people can play the same class and end up with two very different characters and strategies.  This is all thanks to two primary factors: the character cards and the items you choose.

I mean to say that there isn’t necessarily a hard right answer to which items to choose.

In playing Scoundrel, for example, my friend chose the poison dagger, opting for the refreshable weapon that employs a powerfully negative effect on enemies.  I, on the other hand, opted for the battle-ax.  I used it carefully, waiting for the perfect moment after a three-round setup, to annihilate two enemies in one blow.

When you start your new character, I strongly suggest a health or stamina potion as your first purchase.  A health potion heals you by a few points, while a stamina potion refreshes some of your discarded cards.

If you have a character with a large card-hand size (10 – 12) but not many healing cards or limited movement, then the health potion is the way to go.  Characters with low initiative and lots of movement can often evade damage, so you may be better off with a stamina potion to avoid exhaustion.

After the potion is bagged, I suggest looking at your character’s “umbrella” class (or type) to choose your next items.  Gloomhaven, like most RPGs, has classes such as tank, melee, ranged, mages, and support character classes.

For tanks, you want to look at a shield or armor to help you take as much damage away from your team.  Melee characters, on the other hand, should be optimized to deal as much damage as possible, so get a  good weapon.  Ranged classes do well with Area-of-Effect weapons that allow them to do splash damage.

For mages and even certain support classes, look at items like the Cloak of Pockets that allow you to carry more small consumable items.  I am currently playing Spellweaver with this item to carry a power and manna potion, opening a whole world of potent attacks.

Here are some community suggestions for the best items to start your new game with:

Although these are great suggestions from the broader Gloomhaven community, I’m a firm believer in creating your own “style.”

You’ll quickly figure out which items do not work for you or which items you need to play a character optimally.

How Do You Unlock More Items?

When you start your game, only items numbered 1 – 14 will be available from the merchant.  Pretty soon, however, you’ll find yourself outgrowing these items.  After all, that Minor Healing Potion isn’t going to do a whole lot against a major boss dealing ludicrous damage.

Fret not; you will be unlocking MANY more items as the game progresses.

There are two primary ways of unlocking items.  The first is by discovering them at random in chests or as rewards for quests and events.  The second is to increase the prosperity of the city of Gloomhaven.

As your party increases in power, earns rewards, completes quests, and aids the city, you will earn prosperity points.  Each point unlocks more items in the shop, up to a total of 70 items.

And if you think that’s a lot, add all the items found or gained during quests and solo scenarios, and you end up with a total of 150 items available in Gloomhaven.

When Gloomhaven has reached a prosperity level of 3, and your character is at level 5, you can attempt your solo scenario if you dare.  These scenarios can be downloaded or bought as part of an expansion of your game.

There is a scenario designed for each character, and if you attempt it, you do so alone.

They can be fairly easy for some characters and brutal for others.  Although I have only seen and played a few of those, Scoundrel’s gave me sleepless nights of trying to plan it out in my head.

As a reward for completing your solo scenario, you gain an item specifically designed for your character.  Scoundrel, for example, is rewarded with a permanent knife that pierces through armor, an amazingly powerful weapon in her hands.

Gloomhaven items can be confusing at first, but they are a fantastic addition to a great game.   They allow two people to play the same class in two vastly different ways, and adding your unique style to a character adds to the fun.

Once you start getting a feel for your character and your play style, you will find yourself naturally gravitating toward items that either enhance your strength or mitigate your weaknesses. Choose what suits you; just don’t try to turn a tank into a mage or melee into an archer.