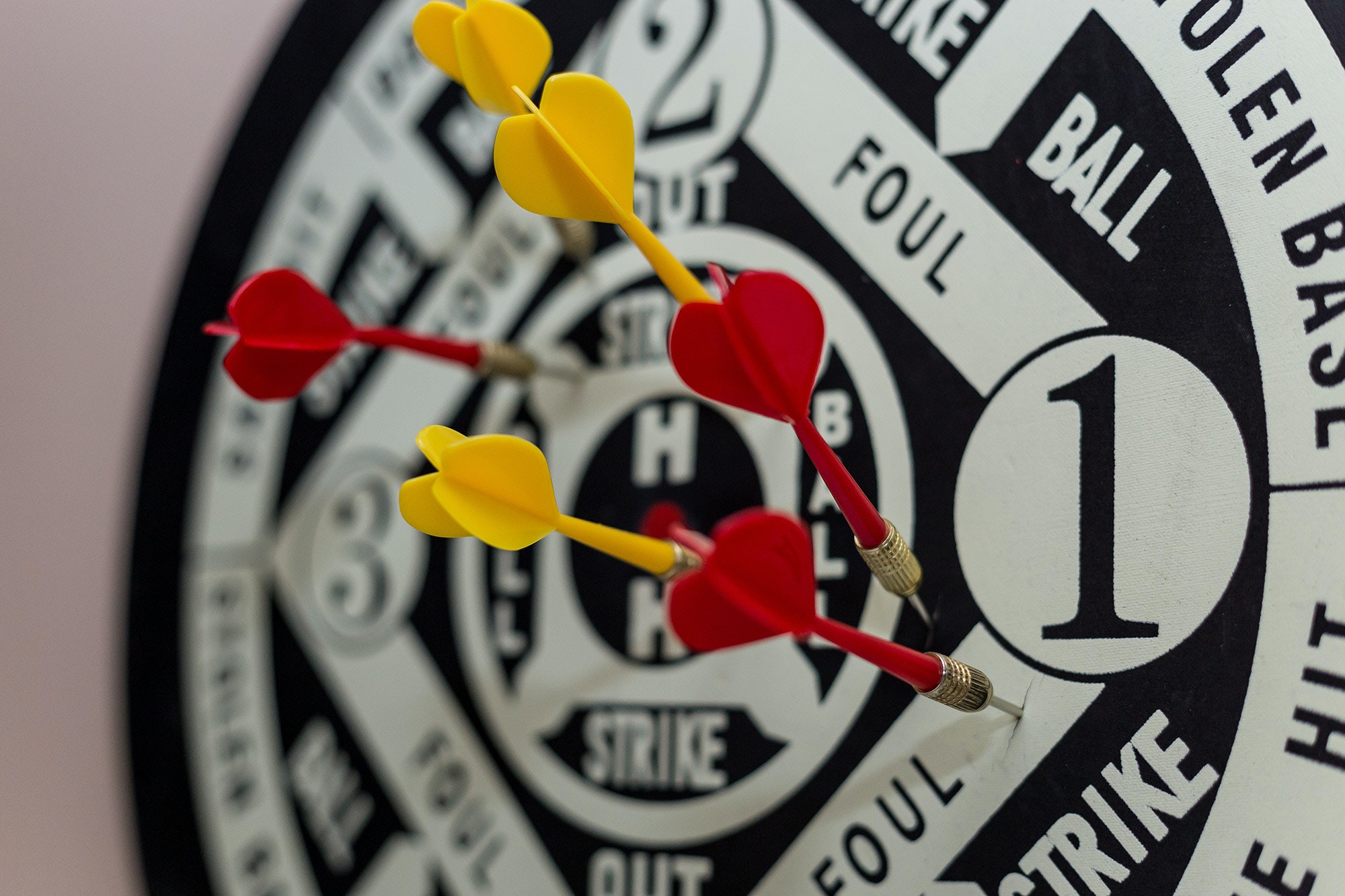 The game of darts is played globally, and most people are familiar with the standard dartboard configuration. Still, many people find out to their surprise that there may be A SECOND dartboard on the reverse side of their dartboard!

This is called the “baseball dartboard” and it actually has its own set of rules. There are, in fact, THREE versions of baseball darts depending on the type of board you have. There are baseball darts played on the regular board and two other versions that use their own special dartboards.

Let’s examine the three versions of this game and how the boards and rules differ with each game, and then you can turn your existing board around and see if maybe you have the baseball game on the back!

Baseball darts played on the standard dartboard is a great way to improve your dart skills as it makes you throw at numbers and areas of the board you don’t normally play in regular dart games.

This baseball darts game can be played by any number of individual players and/or played in teams.

Like baseball, the game is played over nine innings and only uses the numbers 1-9 on the dartboard. In baseball darts, each player throws three darts at the number corresponding to the inning.

So, if it is the first inning, then each player throws three darts at the number one, and so it goes until all nine innings are completed.

Every dart that hits in the innings (e.g., 1) scores one run, two runs for two darts, and three runs for three. If the dart misses the target number, then no run is scored.

The scores of each player or each team are tallied up at the end of the nine innings, and the player or team with the highest number of runs wins the game.

As with conventional darts, the triple is the optimum scoring target. Landing your darts in the triple segment gets your three runs off the bat, and even if you miss, the dart will at least score one run as it will probably land in the single run segment.

Like the real-world game, baseball darts played on the standard board also have this option to add a twist to the game: If a player scores no runs in the 7th inning, then their entire score is halved!

The optimum score in an inning is three triple darts and the maximum score possible in this game (if every dart lands in a triple segment) is 81.

This option could be used to make the game a bit more challenging.

This version of the game has a unique board with completely different markings and configurations to the standard board and is found on the reverse side of a standard dartboard.

The game is usually played either head-head with two players or in teams of two with four players. Unlike baseball darts played on the standard board, this game is more like baseball with fielding and batting teams playing together.

When there are two players, each player throws five darts or is out, whichever comes first.

The team at-bat will look to throw darts that hit scoring areas like hit, single, double, triple, stolen base, and homerun. The area around the red center is an automatic hit. The goal is to score as many runs as possible in each inning.

This team will continue to throw until they have recorded three outs and end the half innings, and then the other team will come up to bat. Then play proceeds through all nine innings as per the actual game.

As with baseball, four balls is a walk, three strikes are out, and there are foul balls if the dart misses the board or hits the foul ball segment on the board. Also, the first two foul balls are strikes, but the third is not.

A dart striking the ‘safe hit’ area would be single, and a dart hitting the ‘double play’ segment is two outs.

The game can be called at the top of the ninth if the team batting in the bottom half has enough runs to win, and at the end of the game, the team or player with the most runs wins!

Dartball is a different game altogether with a different dartboard configuration and has its own unique history, playing rules, and dartboard setup. Dating back to around the early 1920s, dartball was popular with church groups and is played in leagues all over the USA.

Unlike conventional darts, where the board is placed 5’8” from floor to bullseye and the players throw from a distance of 7’9 ¾”, the dartball board is only 2’ or 24” from the ground to the bottom of the board, and it is set up on an ‘A’ frame.

The players throw from 20’ away to make it similar to baseball, and throws are done underhand like a softball pitch or overhand like a baseball pitch. The style of throwing will depend on the specific game rules.

The pitching distance can vary if desired and agreed on by both teams. The pitching line is 6’ and is flush with the floor and directly in line with the board.

This board is diamond-shaped and about 48” X 48” or 4ft square. It is brightly painted and has multiple sections on it, each with baseball scoring areas. Most dartball boards consist of a four-base diamond with three bases and a home plate.

The other segments are ball, strike, out, sacrifice, double-play, triple-play, hit-by-pitch, and error, and these are non-scoring areas.

Like baseball, each team has nine players, although the number of players can be less if there are not enough people for a full team.

Each player gets a turn at the line, and they throw until they get a hit, strikeout, are walked, or hit to an out. Unlike other versions of baseball darts, some umpires call the game.

The team bats until they have scored three outs, and then the next team bats, and the game proceeds through all nine innings as in the real game.

As in the real game, the team with the most runs wins.

With three versions of baseball darts to play, you now have some variations to bring to the party and get away from the normal ‘501’ and ‘Killer’ style games of darts. Remember that dartball is entirely different and would not be found on the reverse side of any conventional board.

If you have a dartboard at home, see if the baseball board is on the back. If so, have a go! If not, you can now play your own baseball game on your regular board and turn your darts events into your own personal world series!