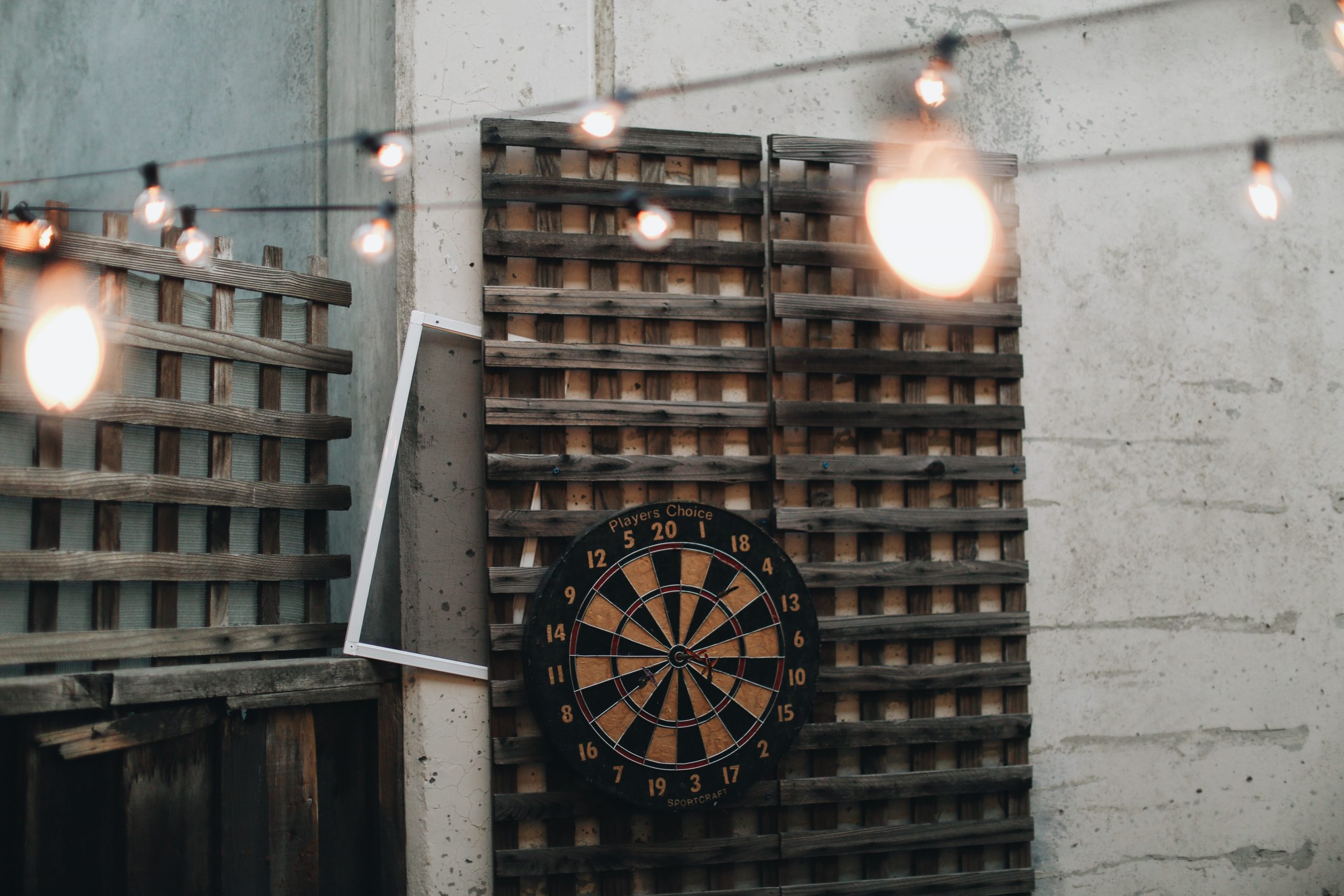 The game of darts is a renowned all around the world. It is found in bars, pubs, and taverns everywhere, and many people have dartboards installed in their games rooms or home pubs and bars.

But at some point you actually have to set up your dartboard. So how high should you mount it?

The standard dartboard height is 5’8″ from the ground, and it is believed that it is set at this height as it matches the average eye level. The distance to the ‘oche,’ or throw line, is standardized at 7′ 9 ¼. “Soft tip dartboards have the same height but are placed slightly further way at 8′.

Let’s explore how to set up your dartboard correctly and ensure you have the correct height and distance to play the game per the default international standards.

The Standardization Of Height And Distance

Before the 1970s, the distances from the throw line to the bullseye were not standardized. Still, when darts gained recognition by international sporting bodies and moved from the realm of pub sport to official game, the measurements had to be standardized.

When setting up any dartboard, the standard point of reference is the bullseye. All measurements for both height and distance are based on the bullseye. Because this is the dead center of the board, it makes sense to set the board up from this point.

This was to ensure that all local or international official competitions had the same format and setup so legitimate competitions could be held and results validated.

Origins Of The Throwing Line Or “Oche”

The distance to the throwing line, or ‘Oche’ as it’s known, has a somewhat clouded history. The term ‘oche’ is believed to have originated from hockey, with the more colorful theory that the word comes from ‘hocken,’ an old English word that means ‘to spit.’

It is thought that the ‘oche’ line was determined by how far a player could spit with his back to the dartboard, so if you are keen to try that and mark that as your ‘oche,’ then you would be traditionally correct.

The actual measurement is a little less orally graphic and stems from simple geometry.

Measuring And Marking The Oche Or Throw Line

Since spitting is a largely unscientific and inconsistent method to mark the throw line, simple geometry comes to the rescue. If you ever asked yourself WHY you needed to learn the Pythagorean theorem in school, you’re about to find out.

The throw line is measured in two ways; the first method is to drop a plumb line from the center of the bullseye hanging at 5’8″ from the ground and then measure seven feet, nine, and one-quarter inches and mark the throw line.

Remember that the throw line is the line behind which all players’ feet have to be to execute a legal throw.

The second method utilizes the Pythagorean method, takes a line from the bullseye center, and extends it until it touches the floor.

The diagonal is always considered accurate and is measured from the bullseye on the dartboard and measures nine feet, seven, and three eights inches or 9′ 7,375″.

The complete measurements of the ‘dartboard’ triangle are as follows :

The line can be marked with tape or a painted line, or you can use the raised wooden platform called an ‘oche’ if you want to make it official.

As a side note, the distance to the throw line is the minimum distance set in the game; you may throw from further away if you choose, but remember that your toe may not cross the throw line.

All of the measurements above are for the standard dartboard and there are other versions of darts that have different heights and distances, let’s look at some of those below.

As a game that can be played by any person, the setp for the dartboard for wheelchair darts is a little different as would be expected.

The height of the dartboard in wheelchair darts is set at 5’3” against the 5’8” of the standing board. The meaurement of 5’8” was considered as the average height of an Englishman in the 1920s and this is how this height was conceived.

The distance from the throw line to the board is the same, at 7’ 9 ¾ inches as per standard darts.

Invented in 1975, electronic darts came about as a result of slow scoring!  Electronic boards are able to score automatically and this speeds the game up considerably.

Also known as soft tip darts, the measurements for the dartboard height is the same as standard at 5’8” , but the throwing distance is increased to 8 feet.

In this version, the board itself is designed differently, while the other dartboards above are mostly standard with some minor variations that don’t affect the overall board design and layout.

For American style darts, the height of the board is 5’3” same as wheelchair darts and the throwing line is set at 7’3” inches from the board.

The number configuration on this board is different and if you want to add some variation and challenge to your game, here is one for you.

The height of this board is set at 5’3” from the ground to bulleye center and the throwing line is 7’6” away.

This version has a different boar setup as it is split into six regions with varying scoring points being awarded for each region.

The height of this board is set at 5’2” from the floor and the throwing distance is just 6 feet.

Depending on which version you are playing you may find yourself aiming at a bullseye of varying heights and throwing from either closer or further away.

Darts is played in more tha 70 countries around the world and there are indeed some variations of this historic game, but for the most part the dartboard height remains the same.