There is nothing quite like a Friday night spent with a great group of friends, a flagon of mead, and a fantasy role-playing board game. For a long time, Dungeons and Dragons dominated the orc slaying scene, but since 2017 a new game has dominated the genera, Gloomhaven. Inundated with awards and voted as the best in its class, are there any other games quite like Gloomhaven?

Gloomhaven is pretty unique in its card-based tactical play style and legacy storyline. There are, however, some similar fantasy-based board games, including Descent: Journeys in the Dark, Legends of Andor, A Game of Thrones, Mice and Mystics, Mage Knight, Kingdom Death, and Mansions of Madness.

Since its inauguration into the board gaming world, Gloomhaven has amassed a large following. Many agree that this board game reaches the peak of storytelling, gameplay, and enjoyability. However, can it be so far removed from the competition? What are some of the similarities and differences between kindred-styled board games?

$51.00
Buy on Amazon
A Game of Thrones Boardgame Second Edition

$45.22
Buy on Amazon
Descent: Journeys in the Dark 2nd Edition

Gloomhaven And Fantasy Role-Playing Board Games

Some of the most popular board game genres are fantasy-themed games. Building a party of characters with unique skills to move through various dungeons, killing mobs and bosses for loot in a world that persistently changes as you pay, sounds like a fantastic use of time!

Gloomhaven is unique in that it incorporates a range of mechanics and gameplay features into its play style. Some of these include:

Gloomhaven is generally played with 1 to 4 players.

As with most Role Playing Games, there are six character classes to pick from when starting the game.

These classes include a tank class (the Brute),  a utility healer (the Tinker), and the thief type character (the scoundrel).

During gameplay, your character gains experience and loot, allowing them to improve and face future enemies better. 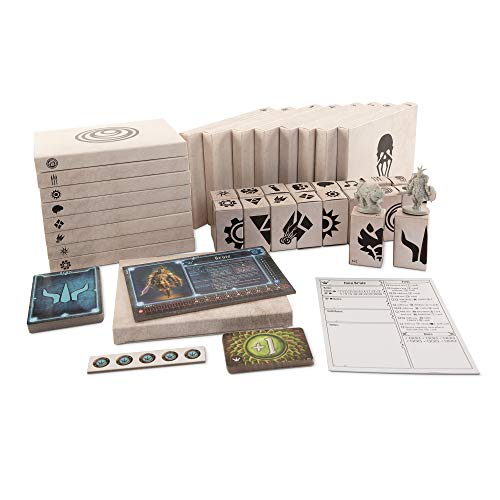 Although Gloomhaven is unique in some of the ways that it tackles gameplay and storytelling, it is not so extraordinary as to be un-comparable with other tabletop RPGs.

Below is a list of board games comparable to Gloomhaven, along with their similarities and differences.

1. Gloomhaven Vs. Legends Of Andor

Legends of Andor is played with 2 to 4 players. The average game time lasts for between 60 and 90 minutes. It has a Board Game Geek rating of 7.2.

The main storyline centers around protecting the realm (kingdom) of King Brandur, which is achieved by undertaking quests spread over five scenarios.

2. Gloomhaven Vs. A Game Of Thrones Board Game

Three to six players can play A Game Of Thrones Board Game. The average game length ranges between 120 and 240 minutes. The Board Game Geek rating is 7.6.

The pivotal focus of the game is in building up an army and declaring war/invading after taking control of one of the ruling Houses of Westeros, all in an attempt to take the iron throne as your own (similar, in fact, to risk).

3. Gloomhaven Vs. Descent: Journeys In The Dark

A board game of up to five players, Descent: Journeys in the Dark (Second Edition), has a minimum of two players. A gaming session usually lasts around 120 minutes. A Board Game Geek score of 7.7 is attributed to this game.

The fundamental gameplay of Descent: Journeys in the Dark revolves around one player taking the role of the heinous Overlord, while the other players attempt to thwart his wicked plans through the completion of quests.

Dice roles determine a large variety of factors in-game, including combat and skills.

4. Gloomhaven Vs. Mice And Mystics

Mice and Mystics is a board game played by one to four players.

An average gaming session lasts for between 60 and 90 minutes. Mice and Mystics received a Board Game Geek’s score of 7.3.

In Mice and Mystics, players have been transformed into mice. They must work cooperatively to save their (human) king while simultaneously escaping from Vanestra, traps, creatures, and Brodie, the resident cat.

5. Gloomhaven Vs. Mage Knight Board Game

Mage Knight Board Game was released in 2011, and between one and four players should play it.

A gaming session lasts on average around 60 to 240 minutes. Board Game Geeks gives it a score of 8.1.

Once forming your party of up to four Mage Knights, players embark on quests, all the while exploring the world of Mage Knight. This board game aims to defeat and capture the civilizations found within the world of the once-great Atlantean Empire.

Gloomhaven, on the other hand, is more story, or campaign-driven, with legacy effects altering the game for future play-throughs.

Kingdom Death: Monster is a 2015 board game that recommends between one to four players (but five people can also play under certain conditions). An average game lasts for around 60 to 180 minutes, and Board Game Geek gives it a score of 8.6.

Kingdom Death: Monster is centered around establishing your new settlement in a dark and horrifying world, starved of natural resources. If that wasn’t bad enough, you still need to fight monsters, craft items and defend your home.

7. Gloomhaven Vs. Mansions Of Madness

Mansions of Madness (second edition, 2016) is a board game for 1 to 5 players. An average gaming session takes between 120 and 180 minutes. According to the Board Game Geek evaluation, this game receives an 8.0 rating.

Set in the Eldritch Horror and Elder Sign universe, this board game is centered around the adventures of eight investigators, delving into the mysteries of Innsmouth and the haunted mansions of Arkham.

The Video Game Adaption Of Gloomhaven

In recent years the popular tabletop RPG, Gloomhaven, has received a digital version.

Although not wholly “ported to PC,” the video game version stays relatively faithful to the board game experience, with two different gameplay modes, up to four players online co-op play, and around 200 hours of gameplay.

The Gloomhaven video game will be available for purchase from online gaming platforms starting October 20th, 2021.

$51.00
Buy on Amazon
A Game of Thrones Boardgame Second Edition

$45.22
Buy on Amazon
Descent: Journeys in the Dark 2nd Edition

Although there are many tabletop RPGs on the market, not all of them have a challenging yet streamlined learning curve. Neither do most of these incorporate tactical and strategic play with a card-centered gaming mechanic. Nor is there a rich storyline and a legacy element, as well as what Gloomhaven has. If board games are not your pick of the poison, then there is also the October 2021 release of the video game, a more or less faithful adaption to the original.